Carlos I brandy was launched in 1958 to mark the 400th Anniversary of the death of Spanish monarch Carlos I (24 February 1500 – 21 September 1558). The image of the emperor – by Italian Renaissance painter Titian – to commemorate the victory in the Battle of Muhlberg of 1547 is the inspiration for the emblem, a feature on every bottle and case of Carlos I brandy. It’s the mark of imperial taste.

Carlos I of Spain is also referred to as Charles V, the Holy Roman Emperor who led the Battle of Muhlberg which took place in Germany against the Protestant armies. Some sources report that Carlos I commented on the victory by proclaiming “Vine, vi y vencio Dios”. The Spanish can be translated as “I came, I saw, and God won”, a paraphrase of the famous Julius Caesar exclamation. The painting Equestrian Portrait of Charles V, also known as Emperor Charles V on Horseback or Charles V at Muhlberg hangs at the Museo del Prado in Madrid. The armour that the emperor wore 473 years ago in the battle and the harness of his horse are kept at the Royal Spanish Armoury in Madrid.

Carlos I brandy comes from Andalusia in the southern tip of Europe. There, in the heart of El Puerto de Santa Maria, lies the winery and distillery. The town of “The Port of Saint Mary” was also where the Santa Maria – Christopher Columbus’s ship – was fitted out for its first journey to the Americas on 3 August 1492 from the nearby port of Palos de la Frontera. The region is bordered by the Atlantic Ocean and the Rivers Guadalete and Guadalquivir. The bodies of water create a special microclimate. The cool, damp westerly wind blowing in from the Atlantic and the blustering easterly gusts from the Mediterranean. These combined conditions play a crucial role in the complex ageing of Carlos I. What we end up with is a truly unique brandy like no other. Its richness will stagger – and fulfil – your imagination.

Adding to what makes Carlos I brandy so inimitable is the Criaderas and Solera system created in the 19th Century. Young distillates called holandas require time to settle and develop and are matured in barrels on the top tiers. Meanwhile, mature Solera distillates age in barrels closest to the floor. The Master Blenders use their extensive knowledge to blend mature Solera distillates with those that are younger and fresher from the Criaderas to bring about a mixture that defines the personality and character of Carlos I. This creative ageing system allows intricate, complex aromas to develop and marry.

Another cornerstone legacy – the bodegas – goes back even longer and dates from the 18th Century when the winery was founded in 1772 by Thomas Osborne. These monumental constructions were built to store wine before being shipped abroad. They were called “cathedrals” because of their imposing height, arches, and layout. The 2-foot thick outer walls – usually made of sandstone or brick jealously maintain the temperature and humidity inside at a constant level. The brandies simply love it.

The final miracle takes place in the barrels where the brandy is matured for more than 20 years. The American oak casks have been previously used to age Oloroso and Amontillado Sherries. After such a baptism in wine, they are called upon to service the spirit. From barrels used to age Amontillado, the brandy takes on notes of almonds and hazelnuts, while the Oloroso casks enrich the spirit with aromas of walnut and seasoned oak. The resulting chemistry defies definition. 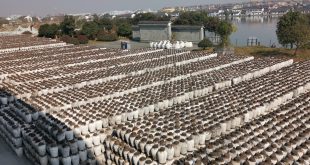