Rachel Barrie has tasted some 170,000 casks of whisky.

She is Master Blender of all three single malt Scotch whisky distilleries belonging to American drinks giant Brown-Forman. These are Benriach, Glendronach, and Glenglassaugh.

Born in the Garioach district of Aberdeenshire, Barrie earned an honours degree in chemistry from Edinburgh University. She began her career as a scientist at the Scotch Whisky Research Institute. Gifted with a natural talent for tasting, Barrie transitioned into whisky production and helped develop brands such as Bowmore, Auchentoshan, Laphroaig, Ardmore, and Glenmorangie.

By the time she joined Benriach in 2017, the Scot counted 26 years of experience. High recognition of Rachel Barrie’s contribution to the industry came a year later. In 2018, she became the first female master blender to be awarded an honorary doctorate by her alma mater the University of Edinburgh. In bestowing the honour, the university cited Rachel Barrie’s “expertise and service to the whisky industry”.

“The ability to combine deep thinking and analysis with creativity as well … sampling thousands and thousands of casks to develop your understanding and theories.”

Over lunch at Amber Restaurant & Whisky Bar in The Scotch Whisky Experience, one of Scotland’s most popular touristic destinations in front of Edinburgh Castle, I asked Rachel Barrie what she considers the two or three most important criteria in her role as a master blender.

The lady certainly knows what she is talking about. Rachel Barrie has sampled about 170,000 casks. On top of her tasting talent, she is, of course, also rooted in science.

“It’s important to understand the difference between all the distilleries in Scotland, but also looking at other spirits around the world. So as a master blender, you have to have an appreciation of both the local, nuances, idiosyncrasies, but also the global and geographical differences between American whiskey, Japanese whisky, other European whiskies, and  Taiwanese. To have a  deep understanding of how each one comes to be, like an individual in the world, which has its own journey.

“So for me that deep understanding is the most important thing. And, then being able to nurture the best nature of that distillery, make it shine, like a child. Like a child, you know, going to school and, in one school, if it’s not doing so well, you should take it to another school. Like maturing whisky, for example evolution in bourbon cask. And if it wasn’t doing so well in some bourbon cask, I transfer it into another one. Or indeed, in sherry casks. You have to understand inventory, understand samples, lots and lots and lots of whisky using your nose. And then make the analytical decisions as to how to bring out the best. The best it can be.”

The Scotch whisky world is the richer and more exciting for the work of Rachel Barrie. Her recreations have been met with rapture, awards, and insatiable thirst

I asked if when joining Benriach in 2017, tasting what they had produced in the past, did she merely want to simply perpetuate what was the previous style or to make judgement calls and changes.

“Yes, absolutely. You know, very recently, just in 2020, we moved on to trial Benriach and it was relaunched. And the whole range of the Benriach, I redid the recipes, and these were new recipes as such. So I could bring to life the world of flavour from Benriach. And it was a very rich and delicate world.

So it is that when the opportunity presents itself, Rachel Barrie is an innovator, fine tuning, experimenting, and recreating new tastes.

The Scotch whisky world is the richer and more exciting for the work of Rachel Barrie. Her recreations have been met with rapture, awards, and insatiable thirst. Whisky aficionados are holding on to their seats for more spirited thrills. 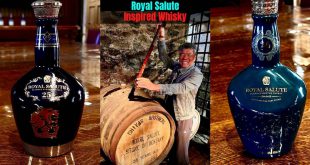 The Stone of De …