WELCOME TO EDITION 779 of GRAPEVINE

Singapore will hold its general elections this Friday 10 July 2020.

Of all the constituencies, there is one the equivalent of Pauillac.

The reason is because back in the days when every constituency was a single ward, Tanjong Pagar was the bastion of the legendary LEE Kuan Yew, Singapore’s first Prime Minister.

Later, Tanjong Pagar – like so many other Singapore constituencies – became GRCs or Group Representation Constituencies where in one vote, you elect a slew of 4 to 6 MPs.

You buy one and get several free.

When it was just Lee Kuan Yew, Tanjong Pagar was the closest thing to Pauillac, the cream of communes in Bordeaux because it has the most First Growths in the 1855 Médoc Classification.

Originally two – Lafite and Latour – when the classification was first announced, Pauillac now has 3 out of 5 First Growths because Mouton was promoted in 1973. The other two Premier Grand Crus are Margaux and Haut-Brion (even though the latter is situated in faraway Graves).

Not only was Tanjong Pagar the Pauillac of constituencies, Lee Kuan Yew was regarded as THE Premier Grand Cru politician.

Lee Kuan Yew – The Most Dynamic
He was the single most dynamic political personality the country had.

This Friday, when I cast my vote, it will be between the ruling PAP or People’s Action Party and PSP or Progress Singapore Party.

The 5 candidates the PAP has fielded is headed by CHAN Chun Sing who – in a closed door address to select members of the Singapore Chinese Chamber of Commerce on 10 February 2020 – described Singaporeans who panic shopped for necessities during the start of Covid 19 as “idiots”.

(A member of the audience had secretly recorded and leaked the address).

I fully agree panic buying will cause supply problem and go on to hurt the population at large.

There can’t be any doubt as to the undesirable consequences of such reckless consumer behaviour.

Chan Chun Sing is, however, a cabinet minister.

Singaporeans – and citizens of any country – expect more from their political leaders.

We expect them to be possessed of intellect, cogent arguments and all-important empathy to win over the public.

How can people look up to leaders who talk down at them?

Calling a panic buyer an idiot is no better than panic buying itself.

Cabinet Minister Chan Chun Sing is lucky he is just a politician where a lower level of accountability seems acceptable.

Lee Kuan Yew – as far as I can remember – never called Singaporeans “idiots”.

Chan has not yet apologised to Singaporeans.

After his idiot outburst in February, on 30 May 2020, Chan Chun Sing gave a press interview explaining why it was not practicable for Singapore to manufacture face masks.

One of the reasons cited was that the country does not produce cotton which according to Chan comes from sheep.

This Friday 10 July 2020, the PAP is putting up Vin Ordinaire Chan Chun Sing. 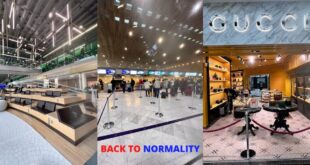